THE HISTORY OF OUR CHURCH

Prior to 1867, Nonconformity in Hampton numbered a few adherents but in that year Mr Charles Allison and Mr Edward Newman came to live in the area and started ` the Cause` as it was then known.

The Church was formed in December 1870 with 32 Members with the first Church Meeting being held the following month. Services were held on alternate Sundays in the Mill Road chapel and in a similar building in High Street Hampton which subsequently was converted into cottages. When the present church was opened, the latter was closed but until the new schoolrooms were completed in 1874 the Sunday School was carried out in the former.

The foundation stone of the church was laid on June 30th 1870 and the church opened for public worship the following October. Dr Joseph Parker, of City Temple fame, was the speaker on that memorable occasion.

In the early years, bitter opposition from the outside was encountered but the members of those days stood uncompromisingly for their rights as nonconformists and emerged successfully from the trial.

During the ministry of Rev. A.R. Shrewsbury ( 1911-25) the membership increased nearly four-fold despite the five years of war that gave rise to changes and disorganisation.

The Rev. A.R.Tripp commenced his ministry in September 1929 and celebrated his 22nd Anniversary in October 1951. The intervening years included the strains of the Second World War when the church was badly damaged. Although without windows through bitter Winter months, the church and Sunday School continued to operate without a break during these testing times.

Hampton Hill United Reformed Church came into being on 5th October 1972 by the union of Congregational Churches in England and Wales and the Presbyterian Church of England – united with the re-formed Association of Churches of Christ.  The `Church on the High Street`, as it is also known,  prides itself in serving the local community in and around Hampton Hill.

Since then, several changes have taken place.  The Foyer was concieved in the late 1980's to address the requirements introduced by the Children Act 1989. A play school had been operating in the premises but The Children Act required that premises used by children should meet minimum requirements that the existing buildings could not meet.

A scheme was proposed that replaced existing the single storey school buildings. Named 'The Foyer' it was thought that the new development would actually be a foyer to the main church. The premises comprised a large central foyer leading on to a two storey block to accommodate a play school with dedicated toilets, an upper room, called the Sycamore room, church offices and the anti space to the sanctuary and the main hall, the Oak Room.

Construction of the Foyer was completed and opened in 1994 and comprises the Ivytree Room and the Sycamore Room, both now mostly used as a nursery. The development also extended out into the church garden to create The Foyer with its folding doors leading out onto the astroturfed garden and access to the large hall renamed the Oak Room.

New toilets were built to include a separate facility that complies with the Children Act, new kitchen facilities and a new church office built with the accommodation also linking into the sanctuary. The church benefitted hugely from a generous grant for the work from the Hampton Fuel Allotment Charity. The Foyer has been in contsant and full use for the last twentyfive years.

The next major transformation took place from 2018 when a project called ` A Place to Go` turned a vision into reality. The vision of a new stained glass window at the front of the church to replace the large plain glass window had its origins in the poor structural condition of that area then. A design competition took place that attracted international interest with the winning entry coming from Mr Don Nicholson.

The window itself was customised for the church at a studio alongside Wells Cathedral by Edgar Phillips and the dedication took place in 2019 attended by the moderator Nicola Furley-Smith and the local MP Sir Vince Cable.

Other work was also being undertaken at the front of the church that included a new gallery floor above the kitchen which was previously a large void. This space now offers a vibrant new area that is being used by a variety of groups and organisations. The kitchen was upgraded, a new disabled toilet installed and a folding screen that opens up the café into the sanctuary.

The church today enjoys its wonderful location on the High Street and continues to serve both its passers by, its members and the wider community. The recent Place to Go iniaitives and improvements make it a beacon of activity and worship that reinforce its presence in Hampton Hill, both physically and spiritually. 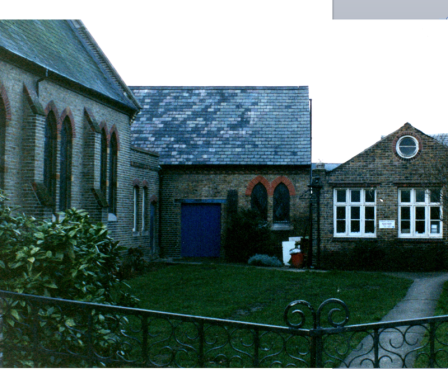 The original school rooms before the construction of The Foyer 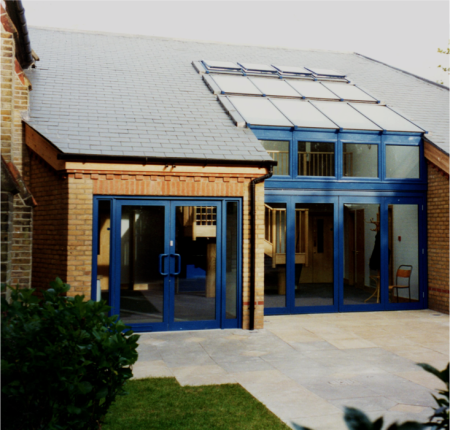 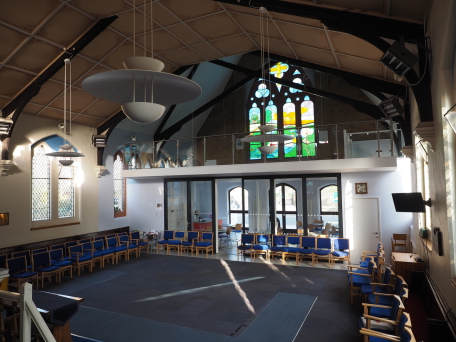 Place to Go, completed 2019, transfomed the front of the church with a new Café, gallery, stained glass window and great transpancy from the High Street into the sanctuary.